This week I had a chat with Nik Ranger of Melbourne band Dada Ono. Did we talk about music? Hell nawww! That would be too professional of me wouldn’t it? Be that as it may, we had a lovely chat about a bunch of things, but it all ends with Star Trek, cats and podcasts, which basically sums up my life. The music speaks for itself anyway, for which you’ll hear in the episode. You can go two better though, head over to their bandcamp page and get Dada Ono’s album “Granny Loves Smith”, and head out to Dicey Riley’s this Saturday night and see them in person if you happen to be in the Wollongong area. If not look out for Nik and Dada Ono in a town near you!

Keep up with all things Dada Ono below: 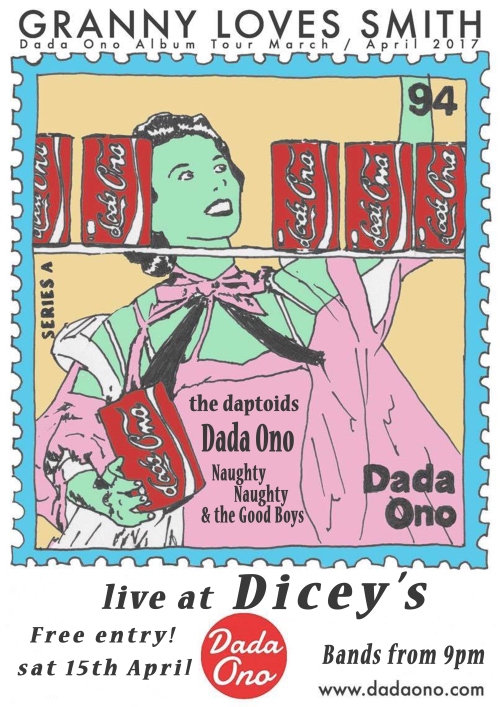 Episode 93. Back to Iron Fist, with Sweeney.

THIS WEEK! It’s a good ole fashioned bit o waxing philosophical with Sweeney, live from the West Coast. If you’ve been listening for a while, you’ll know his voice, and maybe even know him in person. If you haven’t and you’re new, first of all welcome, and then second of all; brace yourselves to hear two grown men who could talk to each other underwater and with mouths full of rocks about pretty much anything.

I’m almost 34 and I still have no idea how sentences should be structured, oh and I say “basically” a lot now it seems.

The Food Fusion boys met me at Dicey Riley’s and we talked fusing food, the correlation between my version of bolognese and my former grass roots revolutionary movement, reality television and food.. And other things. We were even lucky enough to get a surprise cameo from a guy that none of us knew. All in an afternoons podcasting.

I know I’ve used the intro song before, but it’s called “Ice Cream Man” so it’s food, so it’s related. That and it’s a gritty pimpsploitation movie compressed into 4 minutes. In the most awesome of ways.

Long intro, even longer episode! On this one I met up with scholar, podcast producer and friend of mine, Ben, and we hung out at Port Kembla Leagues on a Saturday afternoon and discussed comics, Stephen King and the internet. With a few other things thrown in for good measure. If I wasn’t such a lazy man I’d have a number of links for you to click, everything mentioned on the episode in fact. Instead I thought I’d direct you to the podcasts Risky Business and Roguelike Radio, which for me were the big takeaways from this one. I love me a new podcast recommendation!

Oh, and read Ronin by Cranky Frank Miller. If that name hasn’t been used before (doubtful) then I claim it as my intellectual property by the power vested in me by posterous dot com. Remember them?

Anyone who listens to this podcast knows who Andy is; the guy gets a mention nearly every episode. I’m sure I’m frightening him at this point.. Don’t tell him I said that!

On this one, we met at Cocoon Floatation a few weeks ago on a very warm Sunday morning for a float session at Cocoon Floatation. It was actually the night after the mighty-mighty Sean Sheap’s 40th, wherein my son showed far more charisma at not even the age of 2, than I’ve managed in my entire 33 years on this planet.. But that’s another story.

Andy and I recorded beforehand, which can be found by clicking here, and this is straight afterwards. Cocoon is a really cool place, and you couldn’t find a better Float Facilitator and purveyor of the good vibes than Megan. I implore you to check out Cocoon and The Andy Social Podcast if you’re not already privy. Other than that, vote marfucka! #vote

Last month, myself and Peter Langstaff met up once again at the world famous Dicey Riley’s just before he embarked on his monthlong voyage around Australia following The Boss himself, John Cougar Mellencamp.. You’ll get that poor attempt at humour when you hear it. Anyway, as the Springsteen tour comes to a close, check in on Peter’s blog to read all about his adventures following one of his favourite artists all over the country. When Kid Rock does an Australia wide tour one day, I’ll be sure to follow in Peter’s footsteps.

The return!…. Again! This one has a loooong intro. Long. Sixteen minutes to be precise, including the song. A note on the intro song; it’s from the recently released RTJ3 by the mighty-mighty Run The Jewels and features Zach De La Rocha and it’s awesome.

I can’t remember if I dreamt this, or it’s actually a legitimate rumour, but I’ve heard somewhere that there’s a Zach De La Rocha solo album in the works with production handled entirely by El-P. I hope this is true, but there’s been infinite talk of a De La Rocha solo album over the years with only One Day As a Lion the only thing to closely resemble that. That all being said, if you haven’t heard any Run the Jewels, and this intro is your first exposure, then head over to https://runthejewels.com/music/ and cop all their shit for free. If you want to pay you can do that too.

So on this episode, Louise joins me just after we watched the Robert De Niro/Anne Hathaway starring vehicle, The Intern. Spoiler alert: I loved it. I’m a simple man it seems. We also reflected on 2016, discussed observing how different children do things in different ways and different timelines, and a whole lot of other tangents and non sequitur’s.

News: The Illawarra Music and Record Fair is returning in 2017! This time at City Diggers in Wollongong on Sunday May 7th. Head over to The Crate Diggers Collective‘s Facebook page for more info.

Episode 86. New Kids on the Blockstreet Boys. (Back to the Record Fair Part 2)

I’m experimenting with scheduled posts for this one. If it doesn’t work, well you won’t see/hear it. If it does, then hooray technology! It’s part 2 of our record fair shenanigans. Don’t forget to follow Sean Sheap, DJ Fury, Lord Lucifer and last but definitely not least, The Crate Diggers Collective!

Episode 85. That’s the name of the episode. (Back to the Record Fair Part 1)

Myself, Sean Sheap and S. Hershel Walker returned to the Illawarra Record Fair for the 3rd time this year and recorded TWO episodes. This is part one, where we were joined by Peter Langstaff and two former Vox FM alums in DJ Fury and Bruno the Bluesman, also known as Dr. Dust, according to Lord Lucifer. We neglected to actually clarify that, but it sounds cool. I always wanted a cool nickname, like Smokey, but it never took off. It’s not the same when you name yourself.

We took in the scenery, had some pub-grub and talked a colossal amount of codswallop about a bunch of things. As mentioned above, this is part one. It would always shit me when podcasts split up episodes into two parts, but I’d like to think we do it artfully.. Or that’s what I’m telling myself anyway. Plus you always end up becoming what you hate the most. It’s a fact of life.

This weekend people! It’s here! The Crate Diggers Collective proudly presents the Illawarra Record Fair III, with colour commentary by us rapscallions at Pod Kembla! If you haven’t heard already, check the event info below, and also check out the exciting things that Sean Sheap and S’Hershel have happening with their ventures too!

On this episode we basically just talked a bunch of crap at the venue formally known as The Grand, then Cooneys and then The Grand once again, in sunny Wollongong on a Thursday afternoon. Hilarity, wrongness and non-sequesters ensued!